On October 2, 2001, the selling world of the medical device took a dent. 3M Company received FDA approval of Avagard® and surgeons stopped scrubbing their hands at sinks outside of Operating Rooms. At the time, I was a medical device rep selling Intraocular Lens Implants (IOLs) and the action was at the scrub sink. Gaining Position and Seeking Influence An ophthalmologist once told me that the first scrub of the morning reminded him of when he played hockey and was getting ready in the locker room for the game. Mentally he’s going through his plan, thinking about potential obstacles … END_OF_DOCUMENT_TOKEN_TO_BE_REPLACED 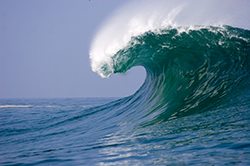 In my experience, people change for their own reasons. For the most part, there are three primary reasons for why people make a change. While these three reasons may be different, they are not mutually exclusive. Change is forced upon them by a competitor. Change is created by an internal desire to achieve an outcome. Change is required due to obsolescence. This past week I had the pleasure of spending the week with a Sightpath Sales Representative traveling in his territory and visiting with both current and prospective clients. Our clients are eye surgeons and their related facilities. I’ve written … END_OF_DOCUMENT_TOKEN_TO_BE_REPLACED